The WordPress.com stats helper monkeys prepared a 2012 annual report for this blog.

Without Love It Ain’t Much………

Really? Sheila E.? I’ve quoted lots of famous folks but never her. But this time this line, this one phrase, warrants a quote (you can ignore the rest of the song if you want):

About the only thing I have in common with this are the last two lines. I never wanted to lead the Glamorous Life. And tour life certainly ain’t it.

I just figured since it’s almost Christmas and all that, it would be a good time for me to reflect on what’s really important in this human existence: to me that is family, friends, shelter, good food, and of course love (clean laundry and a car go a long way too!) I know I’ve said this before and I’ll say it again (well, because damn it, it’s my blog and I can if I want to): you learn a lot about yourself and others when you live on the road — floating between different hotels and cities every week. Although I wouldn’t trade this for the world because it means everything to Noah, it certainly ain’t no glamorous life.

Let’s take Monday for example. In my world, Mondays are travel days. We leave one city behind and head to the next. This week, we left Austin early in the morning to catch a direct, non-stop flight to Baltimore. I had all good intentions of making it here (that would be Baltimore at the moment) by dinnertime to enjoy a meal with my parents and cousins. Well, we left Austin on time and 2 1/2 hours into a three hour flight, the flight attendant announced we were turning around to refuel in Little Rock, Arkansas and then head BACK to Austin. Seriously? Seriously. So, for the second time in my life in the same one week span, I found myself on a plane landing in Arkansas. We took off a mere 30 minutes later and went right back to where we started from. We deplaned 4 1/2 hours after traveling around the country. Welcome to Austin, er, Groundhog Day.

The airline folks could not book us on a plane to Baltimore until Thursday. Meanwhile, it was 6 pm Monday and Noah was opening the Billy Elliot run the very next day, IN BALTIMORE. Meanwhile, all flights to Baltimore were canceled due to heavy fog and the entire Billy Elliot cast, on various flights, were all in the same boat. Some did make it to Baltimore via Washington DC at 2 am Tuesday morning. The rest of us headed back to the same hotel we checked out of earlier that morning. Noah and I ended up rebooking ourselves on a flight on a different airline the next morning with a couple other castmates to NEWARK. So we had dinner, went to bed and tried the same thing the next day. Luckily, all went smoothly this time. We made it to Newark by 11:30 am, got a rental car and drove three hours to Baltimore.

Noah made it here in time to open the show. Somehow he had bountiful energy and did an amazing job, or so my relatives and the reviewers said. I was too tired to even think about going to the show.

Wednesday was a blur. Usually Tuesday is our “settle in” day — yup, following travel Monday. We buy food for the week, try to make the boxy hotel room feel a little more 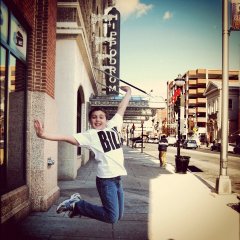 homey, get our bearings around the new city, find the Starbucks, etc. There was no time for that. We were up super early, again, and Noah headed out to do several TV and radio interviews. This is always a blast for him and again, his energy was up and he was incredibly articulate with the various reporters. Nothing but a polished professional. I was the one dragging. After the press appearances, I brought Noah to tutoring and I FINALLY headed out to buy food with my relatives in tow. After stocking up on food and snacks, I picked Noah up, we grabbed a quick bite and headed to the theater for his physical therapy appointment. OK, you get the jist. Non-stop running around.

As if this craziness isn’t enough, not all of our hotels — mind you, these are our HOMES — are what we might consider comfortable. Most of them are problem-free but not this time around. I can’t even begin to list the issues various cast members have had at this hotel: bugs in the rooms, mold, no hot water or only hot water. The list goes on. I won’t mention the name of the hotel because well, it’s almost Christmas and that wouldn’t be nice. Also, the staff here has gone above and beyond in trying to fix the issues and my room is quite liveable at the moment. But still…..

In the midst of this, I somehow manage to run my yoga studio at home. Don’t ask me how. Even I don’t know most of the time.

My cousin asked me what I do all day when Noah is in the show, rehearsals, dance classes, press, school and so on. I tried to explain but then I just sound ridiculous. I somehow have not a spare second.

It ain’t glamorous. I miss my house, my husband, my sons, my parents, my dog, my community. But it’s our life right now and I just have to keep everything in perspective. It’s an opportunity of a lifetime that we are grateful to have. Noah loves it and without love, it ain’t much. That’s all that counts.

Just don’t ask me if I want to go on a plane to a hotel on vacation when this tour is over. I think I’ll opt for the tranquility of my own house for a while.

From Baltimore to your home: Merry Christmas and Happy New Year!